The DVLC display table located in the Community Tent was adorned with flags representing various countries.  Also on display, by board member Rachel Sanborn, a notice in various languages inviting adults to inquire about learning English (ESL).  The gates opened at 10 and by 11:00 o’clock 10 eager students filled out forms in anticipation of getting a tutor.  In addition, several adults signed up to become a tutor! 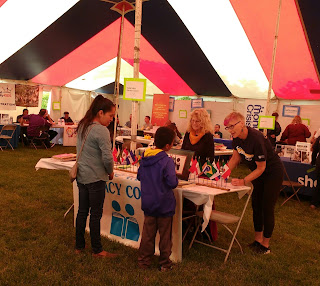 Sue Gannon spoke not only to the non-English-speakers at this benefit but native English speakers too.  A man who wanted to improve his written and spoken English so that he could get a better job was referred to Project Second Chance, which works with people who already speak English but want to improve.  Sue also spoke to  several children who were interested in becoming tutors themselves.  Rather than discouraging them, she advised them to study hard and remember us when they turned 18!

The event was beautifully organized and orchestrated with many volunteers working together to ensure that guests in attendance and providers who participated were able to connect and receive the many valuable services available.  Preparations are already in the works for the next Concord Convoy of  Hope to be held in 2020.